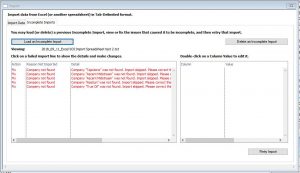 When importing into Pops, it’s often necessary to know the Company for which the import is intended.

To avoid possible errors, such as connecting a Statement of Interest to the wrong company, Pops requires that the company name in your import must match exactly the name of a company that already exists in Pops. An exact match means the same spelling, capitalization, punctuation, everything.

It’s not uncommon for folks to use abbreviations or slightly differently worded Company names in their spreadsheets – they know who they mean, but Pops won’t get a match – and this will cause data not to get imported.

Pops will let you know if it can’t find a match for a company name in your import file, and you will be able to fix that, enter the right company, and try your import again.

Here’s an example of an import file that has some unmatched company names:

Here we click on one of the lines to show all the separate fields for that import line in the Column Value box on the right. Then we double-click on the field to edit. This opens a small window where you can change what is being imported.

In this case, we have double-clicked on the Issuer Name, which was not found in Pops. 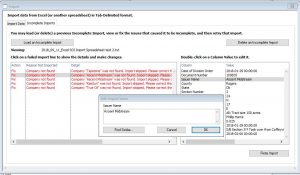 You may edit the name to one that matches exactly an existing one. Pops can also help you find the right company. If you click the “Find Similar…” button, Pops will look for companies that partly match the name you are trying to import. If it finds any, it will display a list of possible matches in a pop-up window. If the company you want is in the list, simply double-click on it to use that name instead. 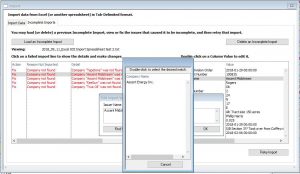 If we double-click on “Ascent Energy Inc.” it will replace “Ascent Midstream.” Click “OK” to save that change.

In some cases Pops may not find any existing companies similar to the one you are importing. You can try changing the import name a bit and then click “Find Similar…” again.

For example, no possible match was found for “KeeSun.” When the “Find Similar…” button was clicked, nothing was returned. 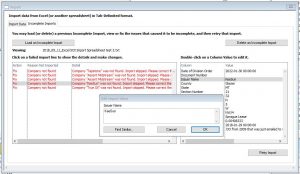 However, after we added a space to change it to “Kee Sun” and then clicked “Find Similar…” again, we got a possible match. So, it’s possible for you to edit the incoming name slightly and then ask Pops to look again. This will save you from having to type the whole name, and will ensure an exact match to an existing company.

After selecting the match, and clicking “OK” the change is written to the incoming import row. 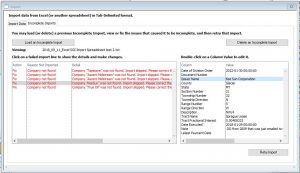 If there is no match for the company name in your import file, then you will need to add that company to Pops before that data will import.

Once import errors have been fixed, you may retry the import.

This site uses Akismet to reduce spam. Learn how your comment data is processed.